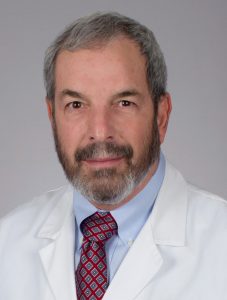 Chief Science Officer and Director of Cardiovascular Research at Huntington Medical Research Institutes (HMRI). He serves as Professor of Medicine (Clinical Scholar) at Keck School of Medicine at University of Southern California (USC) and is an attending cardiologist at Los Angeles County/ USC Medical Center.

Robert A. Kloner, MD, PhD, is Chief Science Officer and Director of Cardiovascular Research at Huntington Medical Research Institutes (HMRI). He serves as Professor of Medicine (Clinical Scholar) at Keck School of Medicine at University of Southern California (USC)  and is an attending cardiologist at  Los Angeles County/ USC Medical Center. Prior to accepting an appointment at HMRI, Dr. Kloner served as Director of Research of the Heart Institute of Good Samaritan Hospital in Los Angeles from 1987 to December 2014. He has run nationally and internationally known cardiovascular research programs for over 40 years, training dozens of medical scientists, and collaborating with scores of physician scientists, numerous research institutions and medical industries world-wide. During his administrative tenure at both Wayne State University and The Heart Institute of Good Samaritan Hospital/ University of Southern California, he built successful research facilities from the ground-up, creating centers recognized for scientific excellence and innovation.

In the 1970s Dr. Kloner received his BS and MD in the Honors Program in Medical Education at Northwestern University, and his PhD (Experimental Pathology) degree  from Northwestern University Medical School where he trained in the laboratory of Dr. Robert Jennings. Dr. Kloner is a member of Alpha Omega Alpha honor society. He completed internship and residency in internal medicine at Peter Bent Brigham Hospital and Harvard Medical School in Boston, Massachusetts (1975-1978). Additional training included clinical and research fellowships in medicine and cardiology at Harvard Medical School and Brigham and Women’s Hospital. He served as Assistant and then Associate Professor of Medicine at Harvard Medical School and was an attending cardiologist at Brigham and Women’s Hospital (1979-1984). He was the recipient of an Established Investigator Award of the American Heart Association (AHA), is a fellow of the American College of Cardiology, an Inaugural Fellow of the Council on Basic Cardiovascular Sciences of the AHA, and was elected to the American Society of Clinical Investigation. In 2015 he was elected a Fellow of the Cardiovascular Section of the American Physiology Society.

A frequent contributor to the medical and scientific press, Dr. Kloner has authored or co-authored over 725 original papers in peer-reviewed journals, 219 chapters or monographs, and 525 abstracts (as of 2019). Dr. Kloner is the author and editor of 18 medical texts including: Cardiovascular Trials Reviews (10 editions); The Guide to Cardiology (3 editions); Stunned Myocardium; Ischemic Preconditioning; VIAGRA; and Heart Disease and Erectile Dysfunction. In addition, he has written and published three medical science fiction novels.

Among his editorial responsibilities, Dr. Kloner served as editor-in-chief of the Journal of Cardiovascular Pharmacology and Therapeutics (2009-2019). He has served as Guest Editor of Circulation. He is on the editorial boards of American Journal of Cardiology, Basic Research in Cardiology, International Journal of Impotence Research, Journal of Cardiovascular Pharmacology and Therapeutics, Regenerative Medicine, and Life Sciences. Among his many career distinctions, Dr. Kloner has been listed in Who’s Who in America, The Best Doctors in America and in 2002 was cited by the Institute for Scientific Information as one of the most highly cited scientific authors. He has an H-index of 100 and is cited over 42,600 times as per the Web of Science. Dr. Kloner is a frequent lecturer at major scientific symposia including the Scientific Sessions of the American Heart Association, American College of Cardiology, and Transcatheter Cardiovascular Therapeutics Meetings, and he has lectured at most major academic medical centers in the United States. He has taught at both the Keck School of Medicine at USC and lectured at Caltech.

While Dr. Kloner is being nominated for his work in two key areas, it is important to highlight his contributions, in general.  Dr. Kloner has made major contributions to the understanding and treatment of heart disease, receiving funding from the National Institutes of Health (NIH), American Heart Association (AHA), Environmental Protection Agency (EPA), Department of Defense (DOD) and numerous corporations and private foundations. He performed some of the first studies on and helped define the concepts of no reflow in the heart, stunned myocardium, remote ischemic preconditioning, and triggers of cardiovascular events.  He has made major contributions to the understanding of pathophysiology of heart attack; treatments for heart attack; triggers of cardiovascular events; studies on high blood pressure and heart failure; the effect of toxins on the heart; stem cell therapy for the heart; the intersection between sexual dysfunction and cardiovascular disease. His current work at HMRI, assesses new therapies for hemorrhagic shock; additional current work studies the effects of e-cigarettes on the cardiovascular system. Dr. Kloner is also collaborating with a bio-engineering group (cell phone app) for noninvasive assessment of heart function.

The two areas of research for which Dr. Kloner are 1) research on the no-reflow phenomenon and 2) impact of e-cigarettes on the cardiovascular disease.

1) No-reflow Phenomenon:  The term no reflow refers to the inability to deliver blood flow to small blood vessels after a blockage of a large blood vessel has been opened by techniques such as clot busting drugs or angioplasty balloons or stents. Thus, even after treatment of a heart attack by early opening up of the blocked coronary artery, downstream blood flow is obstructed in small blood vessels and capillaries (also called microvasculature). No reflow is common in heart attack patients ( 30-50%) and, when it occurs, this often leads to a bad prognosis with more heart failure and death. Certain drugs and therapies  may improve the outcome of no reflow ( calcium blockers, adenosine, adenosine agonists, hypothermia ), which in some of Dr. Kloner’s experimental models have reduced no reflow and also reduced the size of a heart attack. Agents such as calcium channel blockers and adenosine and certain vasodilators are now commonly used in the cardiac catheterization laboratory to reduce no reflow. In a large clinical trial called the AMISTAD 2 trial Dr. Kloner’s research showed that adenosine reduced the size of heart attacks in people and in those patients who received adenosine plus had early reperfusion, adenosine improved clinical outcome. The Kloner research group was really the first to describe no reflow and microvascular damage in heart attack models and have continued to pursue the optimal therapy for this deadly consequence of heart attack.

2) E-cigarettes Impact on Cardiovascular Disease:  It is well established that nicotine accelerates atherosclerosis, leading to heart attack, stroke and peripheral artery disease. In addition, nicotine in tobacco smoke stimulates the sympathetic nervous system increasing heart rate, blood pressure, heart contractility; and causing coronary vasoconstriction. As it increases the demand for oxygen it can decrease oxygen delivery leading to “ischemia” (not enough oxygen to support the needs of the heart) then heart attack and sudden death. Further, there is a common perception that e-cigarettes are safer than tobacco cigarettes because they lack the tars that cause cancer and do not contain the over 4000 chemical compounds created by a burning  tobacco cigarette. It is also thought that they might help smokers to quit tobacco smoking.  However, this conclusion may be hasty.  However, new data from Dr. Kloner’s research group suggests that e-cigarette smoking increases blood pressure, that e-cigarettes may be associated with impaired ability of the heart to relax in the setting of a heart attack, thus interfering with heart function.  Dr. Kloner’s research group will continue to explore the long-term effects of e-cigarette smoking on the cardiovascular system and heart attack.

1) Improving Lives of People Who Suffer Heart Attack: When Dr. Kloner first described the no-reflow phenomenon, he stated that “recent advances, such as coronary bypass surgery and the development of fibrinolytic agents, eventually may make it possible to release coronary occlusions.” Some thirty years later, these techniques and transluminal coronary interventions became the standard therapy of heart attacks. It was interventions, like angioplasty with stents, that brought the no-reflow phenomenon to light because it could be seen human hearts in the setting of a heart attack.  The no-reflow phenomenon is becoming increasingly recognized because of the spread of primary intervention for heart attacks n and the emergence of contrast myocardial echocardiography (an image that shows the heart beating and the flow of blood throughout the heart and the valves). Now that treatments for larger blockages are well developed, the ground has been paved from Dr. Kloner’s work to develop new treatments that will address the ability to enable blood flow, after blockage, into what is called the microvasculature (small blood vessels).

2) E-Cigarettes are a relatively new phenomenon, having been invented 2003.  They have become increasingly popular even as overall tobacco use has declined. In 2016, 3.2% of adults and over 2 million adolescents were using e-cigarettes, and it is projected that these numbers are climbing. Further, e-cigarettes have replaced conventional cigarette usage in 30% of chronic smokers.  Dr. Kloner’s work is directly impacting a current public health crisis.  Over the next year, Dr. Kloner’s laboratory will provide data that may inform the public health debate regarding the danger of e-cigarette smoking.