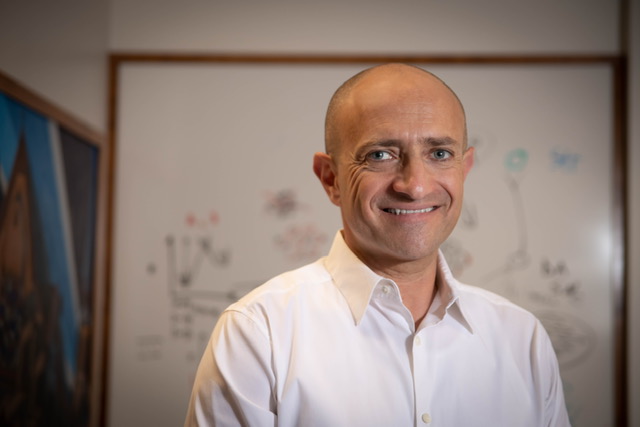 PhD., Beta Kappa UCLA, Luis & Nelly Soux Professor of Microbiology, CalTech. was named by Discover Magazine as one of the “Best Brains in Science under 40”, “Life Science Superstar” by Genetic Engineering and Biotechnology News, and recently received the MacArthur Foundation “Genius” award.

Dr. Sarkis K. Mazmanian, Ph.D. is the Luis & Nelly Soux Professor of Microbiology at the California Institute of Technology (Caltech). He was a Phi Beta Kappa graduate from the University of California, Los Angeles, where Dr. Mazmanian also received his doctoral degree in Microbiology and Immunology in 2002. He was awarded a Helen Hay Whitney Fellowship to for his studies at Harvard Medical School, where he was subsequently appointed as Assistant Professor. In 2006, he founded his own laboratory at Caltech. Dr. Mazmanian has won numerous awards including a Searle Scholar, Young Investigator of the Year at Harvard Medical School, Damon Runyon Innovation Award, was named by Discover Magazine as one of the “Best Brains in Science under 40”, “Life Science Superstar” by Genetic Engineering and Biotechnology News, and recently received the MacArthur Foundation “Genius” award. His laboratory focuses on research into the human gut microbiome to understand the causes of various immunologic and neurologic disorders, with a specific focus on developing probiotic therapies for Crohn’s disease, autism spectrum disorder, and Parkinson’s disease. Dr. Mazmanian is author of over 100 peer-reviewed publications and holds over 50 pending or issued patents. He is a founder of 2 biotech companies and serves on the Scientific Advisory Board of over a dozen companies, academic centers and not-for-profit foundations. Most importantly, Dr. Mazmanian has trained numerous students and fellows who have gone on to successful independent careers in science, industry and medicine.

Discovery and Deployment of a Novel Probiotic Treatment for Autism

Autism spectrum disorder (ASD) comprises a set of complex neurodevelopmental disabilities characterized by repetitive/stereotypic behaviors and deficits in communication and social interaction. There are an estimated 3 million individuals with ASD in the United States. There are no FDA approved therapies for the core symptoms of autism, and many children with a diagnosis require intensive behavioral interventions that can be costly and burdensome, with often limited benefits. Alarmingly, the diagnosis of ASD has rapidly increased over the past several decades, making it one of the most visible public health concerns of our generation. The cost of autism on society is staggering, with annual expenditures of over $250 billion, but most challenging can be the impact on quality of life for individuals and their families. Much attention and research has focused on the neurologic and genetic aspects of ASD. However, recent evidence has revealed that a significant proportion of autistic subjects have abnormalities outside the central nervous system (CNS), and that environmental risk factors may play a critical role. Dr. Mazmanian’s laboratory at Caltech pioneered the discovery that beneficial microbes in the gut can modulate the symptoms of ASD, and that specific probiotics can reduce or eliminate the core behavioral alterations of autism in mouse models. Indeed, Dr. Mazmanian has successfully translated the discoveries from his laboratory research into clinical trials that were recently initiated. This work represents an entirely new approach in medicine, whereby instead of relying on traditional chemical drugs, researchers and physicians strive to harness and restore the body’s own natural “chemistry” to promote health. As clinical trials continue to advance, Dr. Mazmanian’s transformative research may offer new, safe and effective strategies to improve the lives of millions of people affected by autism.

Three million individuals in the United States have autism. Their families suffer from this disease as well, experiencing a decreased quality of life and a heavy emotional burden. While there is no cure and no drug treatment for this disease, care for the individuals with autism runs to $250 billion annually. Dr. Mazmanian’s research has laid the groundwork for a powerful effective treatment for autism and autism spectrum disorder, a treatment that uses naturally occurring microbes to promote health.  He has convincingly shown that there is a cause and effect relationship between the types of microbes in the gut of an individual with ASD and the symptoms associated with ASD, and that intervention with the right kinds of microbes can ameliorate autistic-like behavior.